Alkalis like potassium and sodium are known as harmful elements with effect on burden and coke disintegration, destruction of the refractory material and the creation of scaffolds. Because of the higher input rates caused by low quality iron ore and fuels, the aim was focused on the effect of K & Na during the iron ore reduction. Therefore experimental and theoretical work is performed. According to a standardized methodology, the specific effect on ferrous burden materials has been determined by experiments (reduction, tumbling and softening/melting tests). Furthermore, a model was developed to predict the alkali distribution in ironmaking reactors. Based on thermochemical calculations regions with enriched contents of alkali-compounds can be determined. A multi-stage construction connects the gas-, temperature- and pressure- profiles with the thermochemical calculation of stable alkali-compounds. The model enables the prediction of the K/Na-distribution and circulation inside the processes as well as an overall alkali balance. 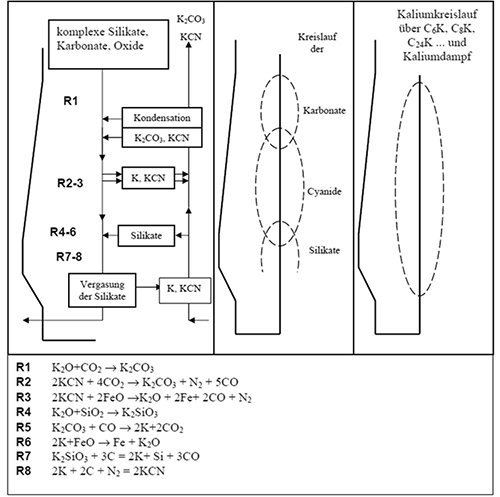 On the other hand, in order to achieve a deeper insight on the effects of alkaline elements on coke reactivity and strength, some industrial coke samples impregnated with different alkaline species(Na & K) in various amounts have been tested under standard conditions to find out their CRI and CSR values. A home-grown controlled method is developed to induce external alkali in coke structure. Scanning electron microscopy, petrographic and Raman Spectrometric investigations demonstrate the change of structural properties. The mechanism of catalysis has been postulated in terms of atomic radii.

A breakthrough was achieved by TEM analysis of alkali treated and reacted samples. Na and K species have been found to infiltrate in the graphitic structure creating enormous lattice distortion, which is the most probable reason of drastic deterioration of coke properties under the influence of alkaline elements. Presently, research is in progress for deeper in depth structural analysis.